Bad banks, lousy banking, and no one properly watching the store.
Case in Point Allied Irish Banks (AIB) in Ireland or further east, Hypo Group Alpe-Adria in Austria. After nationalization of both institutions amid bailouts of €25B and €3.75B respectively, the governments are trying to get to grips with: 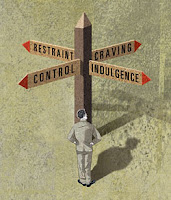 Admittedly AIB may not be in the same league as Hypo who stand accused of close ties to Balkan crime organizations, but the premise that while government intervention and re-financing in both cases may eventually get them through European stress test on the numbers alone, no amount of number crunching will ever reveal just who got lent to, why, and what the long term outcome of such practices are......
The point? It really doesn't matter who or what the institution is, or what the numbers need to look like to pass regulatory scrutiny, the soundness of a banks business (or indeed any custodian, or fiduciary) depends ultimately on how it manages the processes around what it does and what the likely outcomes are.

Basel III as it now expected to be enacted is probably adequate for its numbers, but it can only ever be a part of the picture, not the whole. Markets have repeatedly defied the trust of government in an unregulated environment to act in a judicious and responsible manner. Why should we ever expect that markets should change their tune unless the incentive to do so exists. Valuing assets against "capital tiering" criteria is proven to be a broken model. Maybe its time for a far more systemic evaluation of business operational practices - in reality, Enterprise Risk Management applied in its widest possible context. After all, the risks we are most afraid of are systemic in nature.........
Posted by Peter Teuten at 11:43 AM No comments:

I DO NOT work for The Keane Organization!!

I know that, and hopefully most others, if not all, do now too. But it seems that the The Keane Organization may still be a little confused about that!

Just to set the record straight, my employment relationship with Keane came to an end on 18th May 2010.
Apparently, I was on vacation or otherwise unavailable and actually still headed the BRMS division of Keane from 18th May until Mid June according to what Keane was saying verbally, and in published materials. That was not correct.

I DO NOT work for the Keane Organization, nor do I endorse ANY statements or assertions they make concerning their abilities or qualifications in the area of Risk Management. What is still on their site today, relating to Risk Management may or may NOT be consistent with their experience in Risk Management, but whatever it is, it is nothing that I am associated with.

I do NOT have any interest, residual or otherwise in the Keane SCORE application. The original application team, including vision, design, and all key application development components is NO longer employed by Keane.

What I do have going forward is far more interesting....Teuten Risk Consulting is up and running and open for business. Check us out at http://www.teutenriskconsulting.com/.

We are an outsourcing Risk management and due diligence analysis service with a simple mission: to make you and/or your clients businesses more secure, more defensible, and more transparent to shareholders, regulators, customers, partners and current and prospective stakeholders.

We are drawing on all our many years of experience to provide a service that is second to none with knowledge and expertise that is unique and unparalleled in the industry.

What ever it is that Keane are now offering, please be assured that it is NOT anything to do with me personally, or in any other capacity. I sincerely apologize if anyone feels they have been mislead over this issue. However, any such assertions are made without my knowledge and certainly without my permission or endorsement.
Posted by Peter Teuten at 4:47 PM No comments:

For those of us sufficiently familiar with "Star Trek: The Next Generation", the diagram below is really not the Borg!
Sadly, though, many organizations treat the concept of putting in place a few robust processes mapped to a risk and controls matrix as if it were. The Borg was bad, MMM is good - lets just get that one out of the way early! 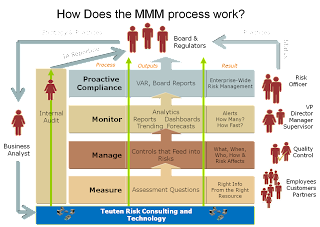 So whats so good about MMM.........well imagine that you are (which you may indeed be!) a risk manager or compliance director (or CTO, CCO CIO or actually anything with a C in it!) and that you are besieged by regulators, shareholders, markets, customers and internal stakeholders and they all seem to want you to show that you are following every regulation, managing risk 'effectively' and are generally better than anyone else around you.
Sound familiar? Sound almost impossible?
Well it really isn't, thankfully. Not because this MMM concept is a new form of intelligence (sic The Borg!) but because it moves all functions into a best practices step processes, and using a series of associative algorithms (nothing genius here, just joining dots with cause and effect conditions) it becomes possible to prove that a business or indeed any entity is "doing the right thing" which is the key not only to defensibility but to a better business all around.
So, next time you hear a Quant expound about Black Scholes anomalies, or VAR interdependency or even Sochastic variable inconsistency, its ok to continue to look dumbly at the source (as i still do!). Why: because other than not knowing what they are talking about, you should also know that the people that need to know what the Quant is saying (and upon whose evaluation your and my future depends!) are likely to also be as blissfully clueless about what is being imparted. More importantly they will give so much more credence to "doing the right thing" and proving that they have done so than being given reams of sometimes meaningless, and often at best confusing, data.
Of course, the secret to MMM is not actually in the diagram....................
If you were to "" Measure, Manage, Monitor you will get approximately 22,200,000 hits. Funny how the best and smartest concepts are so copied. MMM was a concept I authored in 1999, no less (with the documentation to prove it, of course!). Love to see that , IBM all so many other good folks flatter me with their plagiarism!!!

What if the safety blanket were 12" underneath the picture!
Then no one gets hurt, of course; but we the casual observers don't know that.
And that, ladies and gentlemen is how credit default swaps are traded! Rightly or wrongly, he who has the greater picture and the ability to legally disguise the outcome always has been, is now, and always will be, the winner.
If that sounds a little contrary, consider that under existing SEC rules neither of the parties in the trade need be the guy on the tightrope, so that anyone gets to play the game if they have the nerve. Just like Vegas, really.
The market's justification for this? The same tired old argument of creating market liquidity to enable efficient deployment of capital.... strictly,of course, for those with VERY short memories!
Lest we forget: Liquidity curves become parabolic exactly because of capital flights which are every bit as likely as orderly flows, especially in a fast paced trading environment. Add in the ability to create 'interest' in an outcome when there is inherently none, and the parabola effect is multiplied to the extent of the additional liquidity infusion.
In plain English. Everyone can bet on what they want, and everyone can trade with the bookies - and this will all work great as long no one has to wind up their position without having enough cash to cover it.
Oops.......not so likely, after the SEC agreed in 2004 to the Net Capital rule which increased the overall leverage of the "Big Five" Wall Street brokerage houses to an average of 33:1 within 18 month. Yep, the same guys making the book.
What has all this to do with Risk Management? Well, rather a lot actually.
Perhaps if the traders had:
1. Looked beyond the picture and considered that the security of their counter parties (ie the blankets under the tightropes!) were potentially as frail and exposed as they were
2. Understood that covering their own positions could only happen with liquid assets unrelated to the market that triggered the need in the first place.
......then much market volatility could have been avoided.
But human nature won the day. Mans need to get ahead of man for the immediate win will always instigate the Parabolic liquidity trap in any market unless order exists alongside the free flow of information.
The former implies much regulation, the latter that all trades are made with equal knowledge - both counter intuitive to the concept of freely competitive markets. Let's see our Global brains trust dig us out of this one. If the CFTC rules being written to regulate OTC derivatives as a result of the Dodd-Frank Wall Street Reform and Consumer Protection Act truly engage and compel markets to properly assess risks before their impacts occur, maybe just maybe history will not once again repeat itself quite so soon.
Posted by Peter Teuten at 12:17 PM No comments: